August 31, 2014, 12:48:21 PM by Bahl
Hello again, and please welcome the all enticing, magnificent, dancing skeletons! In fact, after a well deserved summer break, I managed to put the success of last news to use and import the first animations! You can see the result below, the player now holds the bolter in animated fashion. There was an intermediate step of development one week ago, where I already imported the animations but they were not actually moving the meshes, so it looked much like dancing skeletons ^^.

Anyways, what you can see still has loads of debugging draw over and you may also notice that the marines arm actually flies up as if he wanted to save his eyes from the harsh radiation on an alien planet. He has a helmet for that purpose though, so this is just a little issue in skeleton importing where negative rotations are not treated correctly. That will be fixed soon, but more importantly, I will at the same time finish my second iteration (0.2) of all game parts with looking at the netcode again and checking if it's possible to actually play with two players. 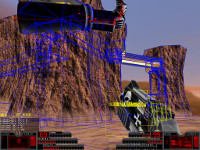 June 30, 2014, 09:35:20 PM by Bahl
This place seems to have become my blog of RivalSpecies JMonkey conversion experience. Speaking of which I can report a success that I had to chew quite a bit before achieving it. But finally I can present a correctly converted Milkshape3D model properly adorned with it's skeleton! That may seem minor to you, but it is the most important step for importing the animations. I'm quite happy about it because it did cost me many attempts to find out why the model looked more like a Chaos Spawn than a Space Marine as soon as I attached it's geometries to an unsuspecting skeleton. But anyways, without further ado, the final result with extensive debugging draw over for all kinds of entities and skeletons: 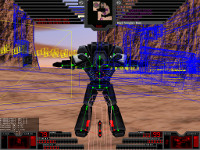 two players on the score

February 23, 2014, 08:41:07 PM by Bahl
Hello again, it is time for another screenshot! What you can see this time, is a basic scoreboard (very basic, admittedly) and for the first time, two players on the map: 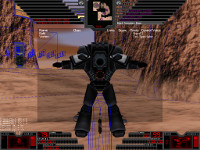 I've also sorted out the spawn point selection so that players spawn at the correct location. So while I sorted out the basic network communication, there is still quite some things left to do, most visible is that the animations are not played. So that's likely going to be my next main task.
0 comments | Write Comment

The menus and basic gameplay works 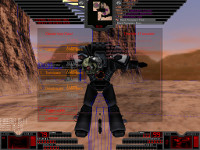 What you can see is that the menus now work. I've decided to stick to one size fits all so that they cover the same space no matter how large the screen is. That is at the lowest resolution 640/480 and currently lets some strings overlap but that is a minor issue for later.

Additionally you can see that the player and weapon model is displayed and the hud contains the corresponding information. That is also true for the control areas. So as of now it is possible to actually fullfill a winning condition for the gameplay and thus go through several rounds of basic game play.

There is still a lot of stuff missing as stated in earlier news. But I think my next focus will be to be able to connect to the game with a second client. For reasons of the Open GL rendering engine that means I'll have to connect headless, just by console, but I hope it'll be easy to implement a simple console client that allows basic menu interaction and spatial navigation.
1 comment | Write Comment

December 31, 2013, 10:18:32 PM by Bahl
Last time, I had to realize that the level loading doesn't include the gameplay properties of the map entities. That is fixed now (for the most part) so you do have the right to have a bolter! You still see a tiny model of it because it takes a little more to actually implement dynamic loading ... plus it is New Year so I wanted to post anyways :-P.

In other news, I've fixed the new HUD, specifically the radar bit. So here is a new picture which also shows a few other improvements for the interested viewer. Happy New Year! 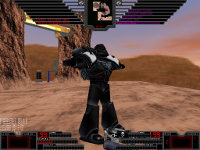